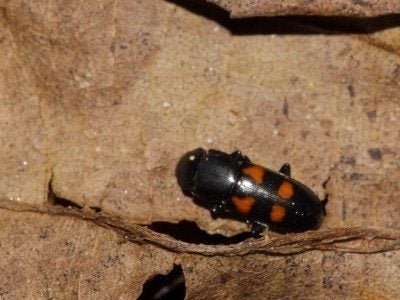 Sap beetles are extremely dangerous pests of commercial and home fruit crops. What are sap beetles? They are small beetles present in many crops, including corn and tomatoes. The insects bore into ripe or damaged fruits and their larvae live inside. Here are some tips on how to control sap beetles and prevent their destructive eating habits from destroying your fruit.

What are Sap Beetles?

Sap beetles are also known as picnic beetles. There are several species with the largest only ¼ inch long. These tiny insects hide in winter and emerge when temperatures warm in spring. The hard carapace is oval to oblong and either mottled brown or black. The easiest way to distinguish sap beetles from other beetles is their club-shaped antennae.

You will see the insects in rotted vegetation, under fruit trees where overripe fruit drops, and even compost bins. Although they are small, the insects’ feeding activities can wreak havoc on commercial operations where perfect fruit is an important commodity.

The home grower usually doesn’t mind a few holes, but be warned. Sap beetles also lay tiny eggs inside fruit – which hatch. Larval feeding activity isn’t as obvious, but the presence of the eggs inside the fruit may be a turn off.

What Plants are at Risk?

Sap beetles on plants usually are spotted towards the end of the growing season. Their feeding habits are usually confined to rotting or already damaged fruit and vegetables but occasionally they will attach healthy produce. The most commonly affected plants are tomatoes, sweet corn, muskmelon, stone fruit and pommes, and berries. Sap beetle damage will render the food unsuitable for human consumption, but you can still use it as animal feed.

How to Control Sap Beetles

The first step in any control is prevention. Pick up ripe or diseased fruit from the ground to keep the juices and fecund odor from attracting the beetles. Harvest food as it becomes ready.

Sap beetle control with pesticides is not usually effective since the pests don’t appear until you are about ready to pick the fruit. Carbaryl and Bifenthrin have been shown prevent some sap beetles on plants but only in heavy infestations.

Trapping or baiting is another method of chemical warfare. Choose a food that the beetles particularly like, such as banana or melon. You can also use vinegar, stale beer or molasses, water, or yeast mixture. Apply a little bit of Malthion or another effective pesticide to the food item. Change the bait every 3 to 4 days and keep it out of the reach of pets and children.